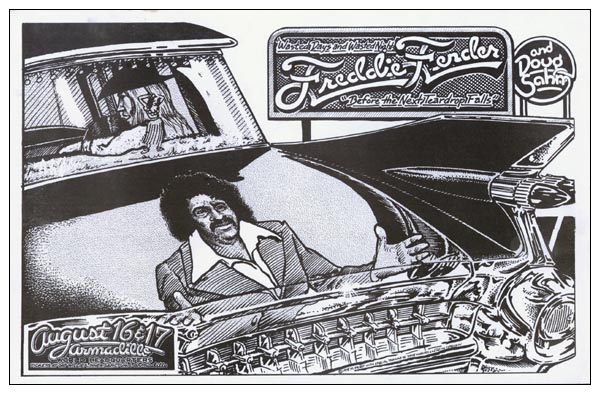 Tex-Mex bluesman Freddy Fender stood at the peak of his popularity as a country-western crooner when he played the Armadillo World Headquarters with Doug Sahm in 1975. Just since the first of the year, consecutive mega-singles -- "Before the Next Teardrop Falls" and "Wasted Days and Wasted Nights" -- had lifted him from obscurity to stardom.

The San Benito native attracted large, enthusiastic crowds for each of his performances that gig, but it was the only time he played the Armadillo. And while the music- (and fun-) loving Dillo audiences included their usual odd mix of hippies and rednecks, the strangest sight those nights was Sahm the rocker taking a back seat to Fender the crooner as the erstwhile Sir Douglas Quintet leader and his band opened for and then played behind Fender during his set.

Michael Priest's poster for the Freddy Fender concerts Aug. 16 and 17, 1975 at the Armadillo World Headquarters foreshadowed the onstage arrangement by putting an enamored Doug Sahm in the back seat of Fender's fancy Cadillac car.