Here is a great tape for fans of the rarely seen comedy sketch show FRIDAYS! See Michael Richards before he became Kramer on Seinfeld! This episode, from 9/18/81 is hosted by none other than Andy Kaufman with musical guest Sir Douglas Quintet. This episode, where Kaufman "can't play stoned" and gets into a fight with the cast was featured in the Kaufman film starring Jim Carrey. (In the photo below Andy throws a glass of water at Michael Richards!) This hard to find show is even complete as aired, w/o/c. A rare chance to see this classic again! 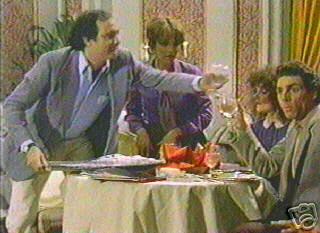